"Last Night I had a Dream," De Jonckheere Gallery, Monaco 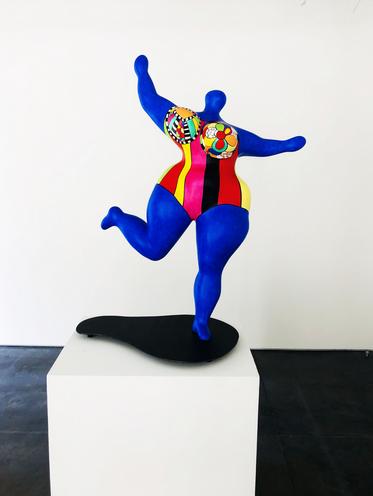 Niki de Saint Phalle is one of the most preeminent female artists. Saint Phalle, of French-American descent, was a self-taught sculptor, painter and filmmaker known especially for her fiberglass, mosaic and painted polyester sculptures.

Saint Phalle initially began with oil paintings and colorful collages containing visual elements related to violence, such as guns and knives. This concept would be later developed in her renowned Shooting Paintings, in which she filled polythene bags with paint, encapsulated them in plaster on blockboard, and shot at the construction to release the paint.

Saint Phalle’s most paradigmatic works are the Nanas. These voluptuous female figures serve to represent the ideal archetype for women in modern society, and can be seen in cities and museums all over the world.

Important works by Saint Phalle  include the Stravinsky Fountain, next to the Pompidou in Paris (1983), the Tarot Garden in Garavicchio, south of Tuscany (1998), the Grotto in the Royal Garden Herrenhausen of Hannover (2003), and Queen Califia’s Magic Circle in California (2003). Her work is represented in numerous museums and public collections around the world. In 2000, she received the Praemium Imperiale en Japón, the equivalent in the art world to the Nobel Prize. Niki de Saint Phalle died in La Jolla, California in 2002, at the age of 71.