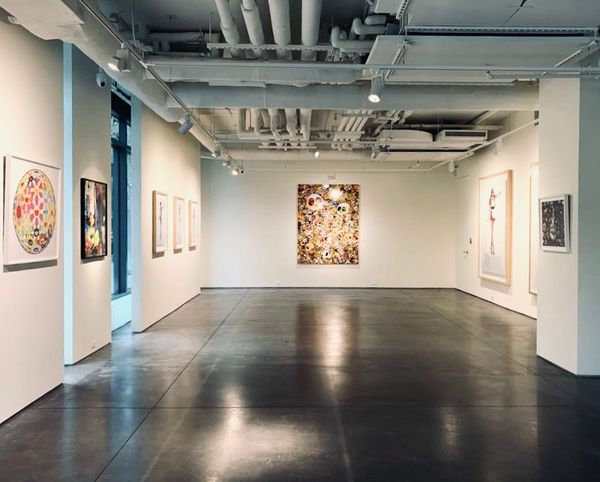 VIEW SOME OF THE WORKS

The Nohra Haime gallery is pleased to present a solo exhibition of renowned artist Takashi Murakami, from September 2 – October 9, 2022. Takashi Murakami is arguably one of the unique contemporary artists who is not only a famous fine art artist but also has huge commercial power. This unusual combination of commercial and artistic power is actually a very biting critique and comment on Japanese and fine art. The exhibition is comprised of a group of photographs, works on paper and paintings showcasing his most iconic characters for which he has become internationally well known. The works belong to the period when he was at the peak of his career as well as works from important periods where he created some of his most important leit motifs.

In order to understand his general artistic production and his characters, which are seemingly just manga cartoons invented by the artist, it is fundamental to understand the context in which he created them. After obtaining his PhD in traditional Japanese painting Nihonga, he became very critical of Japanese post-war art. One has to keep in mind that although Japan today is a world power, they lost World War II, and the defeat not only created a trauma that would affect many generations, but it also made them loose their sense of national identity. Therefore, Murakami describes Japan during this time as classless and completely flattened. Furthermore, during the 1950s the reconstruction of post-war Europe and Japan was heavily influenced by the United States. This caused a merging of cultural borders and national traditions, particularly artistic traditions that were isolated to the margins of society and American pop culture became predominant. This is why Murakami invented his famous concept of “Superflat” that he published in 2000, which he also borrowed from Western modernist art where the central theme was “the flatness of the surface.” More importantly, he believes that the art produced during the post-war was completely westernized and lacked a true Japanese identity. For Murakami, the groups that emerged during that time, such as Gutai, were discovered later and primarily recognized by foreigners and only because of that were raised to the status of prestigious art. On the other hand, although Murakami studied traditional painting, he had always been very interested in manga and anime. As a matter of fact, “Superflat” involves using elements of what is considered “low” art, anime and manga, presenting them as “high-art.” Murakami began to focus on Japan's 'low' culture, and the larger subculture of otaku, which is a word that describes people with consuming interests, generally, manga, video games, anime or computers. Thus, his characters help blur the frontier between ‘low’ and ‘high’ art.

In this context, some of Murakami’s iconic characters in the exhibition include his smiling flowers, Jellyfish eyes, Miss KO2 and skulls. His smiling flowers evoke repressed emotions of the collective trauma triggered by the Hiroshima and Nagasaki bombings, where the flower expresses contradictory emotions. Jellyfish eyes are pivotal, as he wanted to reflect the search for an identity. He was influenced by the use of eyes in Surrealist works that encouraged viewers to interact with the work and establish a relation. However, his work does not create a bond with the viewer nor is it necessarily an aesthetically pleasing experience. Instead, it is a more simple appreciation where the eyes make it a physical experience. Miss KO2, a fundamental work as it was the first large sculpture he created, based on the photograph of Miss KO2 Satoeri, included in the exhibition. All of his versions of Miss KO2 are an emblem of peace. They further symbolize femininity and a timeless sex-symbol. Finally, in 2011, Murakami first started incorporating skulls that reference death and decay in relation to post-war Japanese society, and the dichotomy between joy and terror, which is why the skulls are also colorful.

For more information: please contact Carolina Scarborough at ny@nohrahaimegallery.com or 212-888-3550