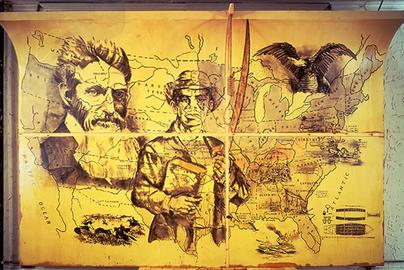 ​​
For the first time since 1984, multi-disciplinary artist Lee Jaffe will exhibit HISTORY REVISTED, a series of large-scale mixed media artworks addressing the sharp edges of American history. Born in the Bronx in 1950, Jaffe grew up with his Jewish family during the social tumult of the Civil Rights and decolonizing movements around the globe in the 1960s. Jaffe’s command over composition derives from his extensive training as a conceptual visual artist but also guided by a broader commitment towards social justice. As a filmmaker in the 1970s and 80s, Jaffe collaborated with revolutionary artists Gordon Matta-Clark (Chile) and Hélio Oiticica (Brazil). Jaffe is perhaps most recognized for his ubiquitous photo portraiture of popular culture and music figures such as reggae pioneers Bob Marley and Peter Tosh and visual artist Jean-Michel Basquiat whose collaborative work titled Portrait of Cinque is included in the exhibition.

IN THE WINDOWS
CURRENT
View on Mobile