From the Mid to Late 90s, I lived with my mother Kati in Hell's Kitchen, in an apartment she has held since 1986. I live here again, as I have for the last three years, since sh retired and moved back to Finland. A small watercolor by her neighbor, the artist Even Sonneman, hangs on a wall in the bedroom, where it has since it was gifted to Kati. Signed and dated 1998, the watercolor returns to me the year of its making, a time I came to better know both Eve and her work. Always steady, always searching... Eve's hand, eye and mind make contact and leave impressions. One impression that sticks with me is being invited by Eve to Lawrence Weiner's birthday party in his West Village home. I believe the two were just embarking on their collaboration, the small publication entitled How to Touch What (2000), a series of Eve's color photographs with Weiner's words stamped over them in his own signature hand, eye, and mind. The conversation between them focused on the pleasure and revelry of life. I'm reminded that the party was that too - everything a party should be - returning a warmth that only time can develop. Merriment, asking me: what is felt, after all these years, what stays, what is held close? The hospitality of neighbors, the adjacency of living. These past three years have been marked by events both monstrous and meaningless and also, for me, by the steadiness of this proximity, in an apartment in a building on a street in a city, with Eve, just down the hall. The enduring bond of our camaraderie has come to produce this publication, 19 Watercolors. 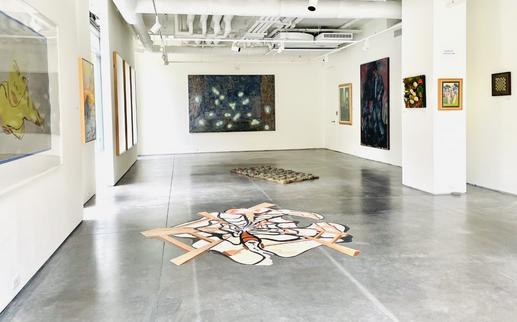 The Nohra Haime gallery is pleased to present 1980s Italy, from October 12 – November 2, 2022, followed by the opening reception on Wednesday, October 19, 2022 from 6:00 – 8:00pm. The show features Italian artists from the Transvanguardia movement, one of the most influential of the Post-war era along with Arte povera.  The exhibition will take you through the origins of this movement,  and how it informed Italian contemporary artists, some of which are represented by the gallery.

Prior to the Transvanguardia artists one of the other most influential Italian movements was Arte povera that was particular to Italy. However, the most important international trend prior to the 1980s was conceptual art. Alighiero Boetti and Laura Grisi, both included in this exhibition, exemplify the influence arte povera had on their works, but they are also considered some of the most original examples of international conceptual art. Boetti’s Cinque X Cinque = Venticinque epitomizes his interest in systems of classification and non-Western traditions, influenced by his travels to Afghanistan and Pakistan. Laura Grisi, reflects through her series “The Mirrored Palace,” and the materials she uses, both a sensorial and mental visual representation.

On the other hand, the Transvanguardia artists represented by Francesco Clemente, Sandro Chia, Enzo Cucchi, Piero Gilardi and Mimmo Palladino, wanted to return to the past, to traditional painting. One of the first exhibitions they had as a group was in the 1980 Venice Biennale, whose works stood out for their diverse styles and common vision. Their works intentionally depict figuration, and they recuperated the importance of the image and narrative, as opposed to the concept. Interestingly though, they were still heavily influenced by arte povera and the use of new materials and exploration of texture. This is clearly seen in Palladino’s pictorial representations of Untitled (Blue) and Untitled (Green).  Sandro Chia’s Untitled, shows his larger-than-life figures, also reflecting their human vulnerability and sensibility. Gilardi, although not one of the most famous Transvanguardia artists, was a fundamental player and was known for his use of extremely varied material and texture seen in both Foglie and Pave Piuma. The legacy of these artists can be seen in contemporary artists such as Silvio Merlino with his painting of La Stanza delle Lucciole where he uses diverse materials in a traditional painting, evoking an extraordinary texture and materiality.