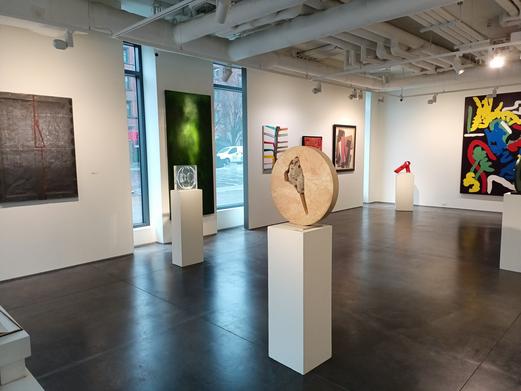 Although both mediums are more traditional, as painting at the beginning of the 1980s and many times over, was considered to be “dead,” this group of artists will prove the contrary. Some of them are informed by more traditional sources such as the Hudson River School of painting, while others are much more experimental. More importantly, through their diverse pictorial techniques, they help revitalize the language of abstract art. The representation of their own external realities will ultimately engage us in meaningful visual dialogues.

Bernard Frize, Francisca Sutil and Julie Hedrick, using color as their goal, explore the essence of painting, using the most fundamental elements, making them technically innovative. However, Sutil transcends the aesthetic, evoking a reality that she aptly stated, “is layered and mysterious, visible and invisible.” Dunoyer’s work emphasizes the stroke and its power over monochrome. Opposing him, Wood’s strokes meander around the canvas and are blended to the point of disappearing.
Loló Soldevilla, one of the fundamental figures of Cuban geometric abstraction presents a panorama of squares and circles. Soldevilla will be viewed alongside contemporary artist Jacqueline Humphries who reinvigorated the language of abstraction through her use of online idioms into her practice. The exhibition will include an early work where her drips are reminiscent of the abstract expressionists.

Abstractions will also showcase the works of Susana Jaime-Mena which are a great transition into sculpture, whose forms are largely geometric and are neither sculpture nor painting. More importantly, influenced by many sources such as literature, philosophy and physics, amongst others, her work is associated with both Painting and Sculpture. This is due to her juxtaposition of sculptural objects with a combination of materials, creating painterly surfaces that extend beyond the wall allowing viewers to see both a Painting and a Sculpture.

Rogelio Polesello, Lika Mutal and Sophia Vari are amongst the sculptors represented in the exhibition. Polesello re-energized the language of concrete art with his translucent work that produced an optical effect of reverberation. Conversely, Lika Mutal’s stone sculptures are informed both by Western and non-Western aesthetics, including Pre-Columbian and Pre-Historical rock art. In Stone Tide the artist interposes a smoothly polished stone with a found coral thus, uniting the universe.  Sophia Vari’s early abstract bronze sculptures only
hint at representation and can also be seen as amorphous.

Gregg Louis and Juan Cortés represent a 21st century way of working, Louis by his approach to painting through his bold and colorful strokes and Juan Cortés through his use of technology. Cortés, a fast-emerging young artist whose sculptures and installations are based on interdisciplinary processes between art, science and technology, uses his scientific knowledge to break down complicated theories to create “translation machines,” robots and acoustic levitators. Magnetic Box II is a living drawing that is constantly changing.