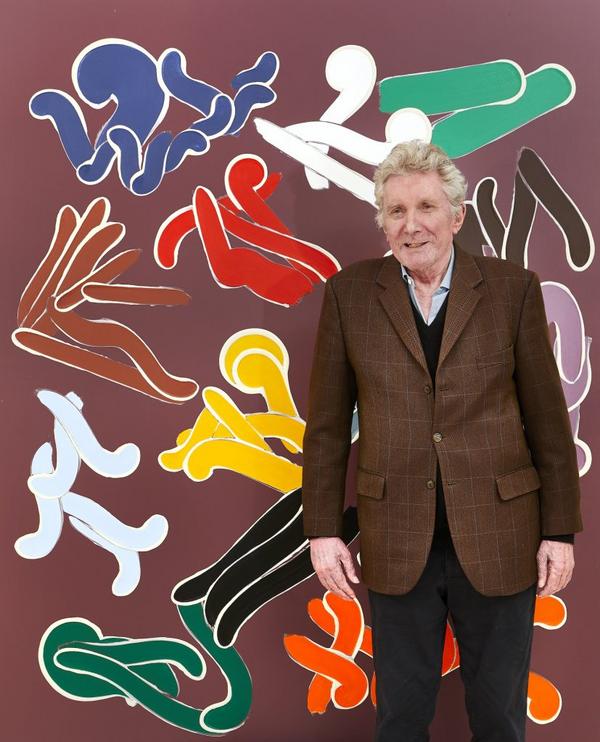 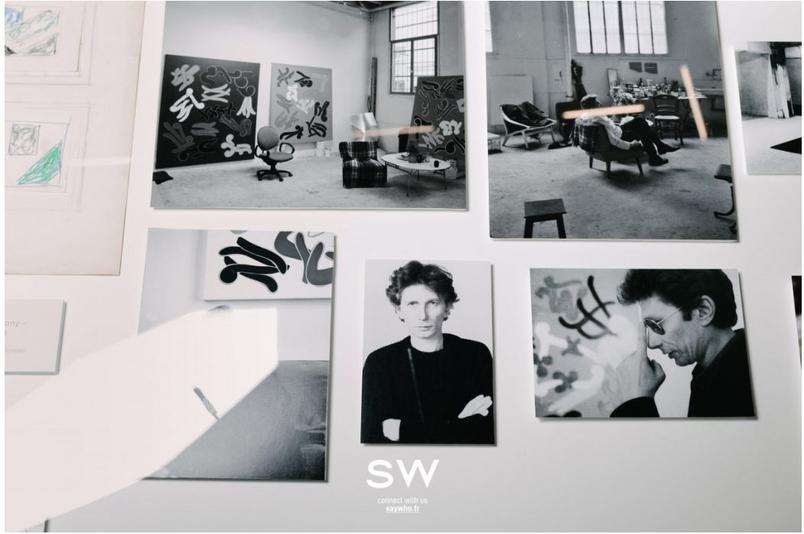 "Representation is not my problem," says Pierre Dunoyer. Abstraction is. The deepseated interest of this French artist in abstraction is grounded in the Parisian intellectual context of the mid-1970s. Speaking about those times, the artist recalls, "I wrote about art and talked even more about art. There was a lot of interest in abstract painting then. For us, the main issue was to make an abstraction."

What kind of abstraction? Pierre Dunoyer offers a decidedly transcendent kind of abstraction based on his idea of "tableau." He explains, "I want to realize the difference between when we say "tableau" and "painting." "Tableau," for him, is "Picture" as the end result of "Paintings." Central to his approach is a method that gets down-to-the-basics of abstraction and which most important goes beyond them.

Pento I (1978) his first painting also represents the "first expression of my method," he says. In it, he sprays a blue band on an all-white ground and paints over parts of the band only with the same shade of blue pigment using a brush. Different textures distinguish the sprayed and brushed portions. Certain major features are already discernible, from the artist's shaped and measured stroke-cum-mark to the close attention paid to the relationships of form and color. Here already also, the importance of the color of the ground is emphasized. In order to arrive at the desired value of white, as he says, "White like screen, not white like surface," he first painted the ground black and then applied succesive layers of white. Through Branches of the Willow Tree, another painting executed later that same year in 1978, he found his way. After finishing this painting, he was struck by the fact that its arrangement of forms brought to mind, as the title indicates, the branches of a willow tree, and revealed to him that it is indeed possible in abstract painting to "conserve the emotions, not just intellectual realities," and "to paint," as he says, "the wind." This example also shifted his attitude to the notions of method toward "strategy," that is consider the act of painting as rules which the artist has the right to make up. By 1980, he alters the rules, ending the game, he says, of "stating flatness," and moves on to the more difficult and demanding business of generating a figurative vocabulary of abstract form. In 1981-82,  the relationship of the "figure" to ground changes as the individual shaped motifs constituting the "figure" grow and begin to occupy more and more of the canvas surface. The breaking of another rule, only white grounds and the use of different colored ground in 1982 and 1983, brought out for him, he says, "the iconic significance of each color."

The recent paintings highlighted in this exhibition represent the most sophisticated accounting to date of his special method "to make a tableau," evolved over the last seven years. For this show, for example, the first decision to do an exhibit that would relate to the gallery, which he calls, "physically a small space and spiritually a large space," required careful study of a plan of the gallery. After noting its symmetrical disposition, he knew, he says, "I would have to make an even number of paintings." "Feeling the proportions of the gallery's different walls," he went on to plan the scale of the individual canvases, paying special attention to keep them "sweet and natural for the space." Then, he ordered the stretchers and began to look intently at each canvas and imagine the color of the ground, a key feature after which the titles are named. Among the ten tableaux, on display, there are - referring to the grounds - two red, two blue, two yellow, two green, one black , one deep purple. Close inspection of these surfaces demonstrates that the artist sets down "white stains" on the colored grounds, a device that lets him develop the compositions by painting in other colors over them. He respects as well as transgresses the limits of the edges of the "white stains" and will change the colors and shades of individual motifs at will. As Pierre Dunoyer says, "the game is more open now." Its aim, however, he adds is to harmonize the three main concerns of his method: phenomenal organization, a tableau's physical and material aspect; iconic organization, its figurative value; and ontological statement,  the unique pictorial address of its presence."

The result in the ten tableaux on view are dynamic, fast-time images capable of turning seeing into thinking. About what? Many things, that's part of the openness of the "game," but preeminently about collective and universal issues. How? By the appealing directness and deceiving simplicity of these compositions, notable for their energetic colors and rhythmical presentation of gestural marks, which shake and snake, bound and bounce, so attractive to the eye. But the more the eye looks the more the mind faced with recognizing and then interpreting the apparent pictorial spontaneity implicit in paintings like Deep, Purple, Yellow, Black, finds itself engaged in an exciting and ultimately enlightening process of "dynamic" speculation." as Pierre Dunoyer says, "I want to be a man who speaks from the tableau." He is, he does, and no one speaks more positively or relevantly through abstract painting about the unlimited potential of human freedom.

Pierre Dunoyer was born in Marseille in 1949 and lives in Paris.

He turned to painting after studying architecture and psychopathology. In 1978, he took part in three Janapa group exhibitions in Paris presenting the works of Christian Bonnefoi, Tony Cragg, Côme Mosta-Heirt, Antonio Semeraro and Jean-Luc Vilmouth, then went on to “Tendances de l’art en France 1968-1978 III: Partis-Pris Autres” at the City of Paris Modern Art Museum in 1980. During the 1980s and 1990s, his paintings were presented on a regular basis in galleries in Europe and the United States.

In 1991, Pierre Dunoyer presented his works on the ground floor of the newly renovated Galerie nationale du Jeu de Paume in an exhibition with the minimalist name “Paintings”. This was a series of 24 works of identical dimensions dating from 1989, in no particular order, in 4 series taking up each of the 6 primary colours and based on the same repetitive but random principle. This exhibition, the first and, to date, the last one-person exhibition in an institution, revealed him as one of the most original artists on the French art scene, rigorously presenting a synthesis between the most radical forms of current painting and a certain tradition of what he called “painted works”.

More than thirty years later, this new Modern Art Museum exhibition takes the form of an authentic retrospective, exhibiting 14 paintings in a deliberately tight, strictly chronological order from 1978 to 2022, in which the artist’s initial formalism, with its large white backgrounds, gives way to a freer approach to the painted surface and a variety of shades. Broad, dynamic, free touches of colour move across the dominant reds, blues or yellows which sometimes inspired the works’ titles. The artist describes them as “painted objects”, or “painted thoughts”, which, with their simple, calming influence “have no other ambition than just to be there”.

Three works have been generously donated to the Modern Art Museum for this exhibition.

Pierre Dunoyer : a Retrospecitve in 14 Paintings 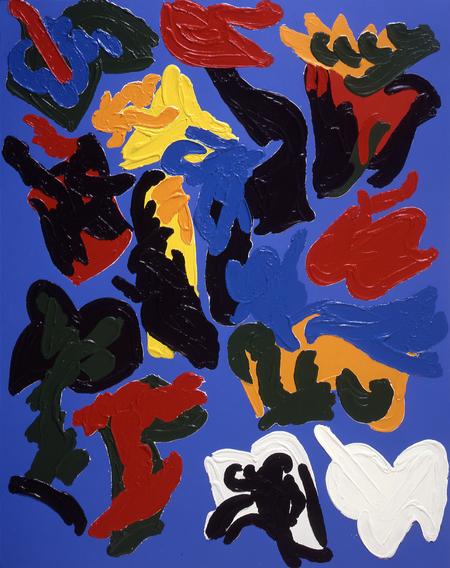