An exhibition of 6 works from the multi-faceted artist Lee Jaffe is now on display at Nohra Haime Gallery, seen together for the first time since 1984. Born to a Jewish family in the Bronx in 1950, Jaffe has had a career that has touched music, film, sculpture, painting, poetry, photography, performance, and installation. His life’s work has never followed one straight path, but through it all there exists a thread of collaboration and soul. Our perspective is informed by the people we surround ourselves with; the conversations we have, the art we create together, and for Jaffe, the trajectory of his life has led him to collaborate with some of the world’s most incredible artists, such as Jean-Michel Basquiat, Gordon Matta-Clark, Bob Marley, and Hélio Oiticica. This exposure and free flowing of ideas has led to a diverse and meaningful oeuvre.

Spurred by an intense need to retell controversial stories of American history that have been skewed, or largely untold, in 1983 Jaffe started a series of large scale mixed-media paintings incorporating sculpture and photography that touch on themes of race, money, and violence. Originally exhibited at Peter Bonnier Gallery in 1984 with other works depicting American historical figures and events. Works on display at Nohra Haime Gallery are together again to be viewed in the context of today, in the wake of the largest wave of protests for Black lives since the 1960s Civil Rights movement. Coming of age during that time, and having close relations and artistic collaborations with people of color, Jaffe’s interest and compassion for the plight of Black people in this country are felt deeply, and his “retellings” of notable events regarding the enslavement of Black people are unflinching, large, and promote a deep, slow regard.

Differently shaped canvases featuring dark varnishes and gleaming gold leaf, the larger than life figures in each of these works fill our line of vision, confronting the viewer. The layering and multitude of objects other than paint adhered to the surface, as well as their irregular shapes contrary to the traditional square canvas, perpetuate a longer look. The multitude of materials used in many of these works, for example the use of animal material in Portrait of Sacco and Vanzetti, fish scales and bones, add to a gritty quality that is encased in gold leaf and a golden tone in all of these works, suggesting decadence and almost a bronze monument.

The historical references in these works are made clear to the viewer. Subtleties are combined with obvious signs that jump out at us - the dollar bills in Portrait of George Washington and The Life and Times of Sally Hemings, the map of the United States and literal gallows reconstructed at the front of Portrait of John Brown and Nat Turner.

By the time of the creation of these works, Jaffe had an installation at MoMA and spent five years with Bob Marley in Jamaica, where as a young filmmaker he was informed by another way of life and met many other musicians and forward-thinkers. Whether he is on stage with Lenny Kravitz playing the harmonica, creating large-scale paintings with feathers and bones, or an installation with sound and drawings, Jaffe’s work never ceases in its ambition or depth.

For more information: Leslie Garrett at 212-888-3550 or art@nohrahaimegallery.com 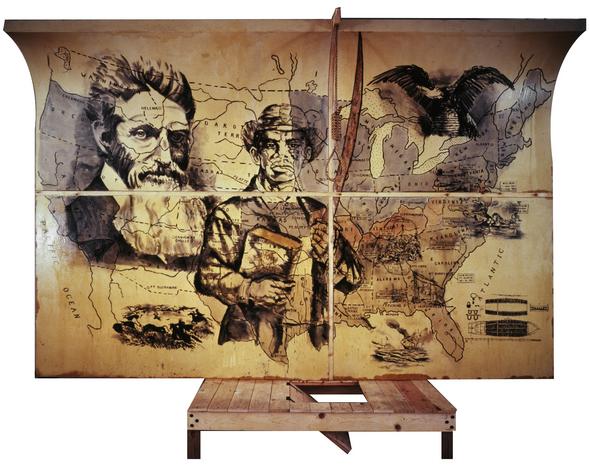