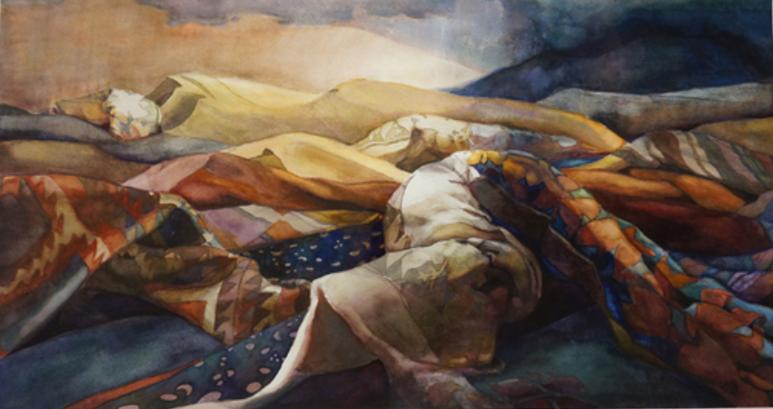 Valerie Hird’s body of work is a visual compilation of the experiences, associations and memories collected in her trips through the Middle East, Northern Africa, Spain and Turkey.

Hird creates a fascinating topography of her own through the landscapes conquered by her suggestive memories.  Her work is organic, evocative, and extremely personal in its flow. We can see this distinct essence in her representations of the rocky arid mountains and the aroma of the perfumes sold by street venders. The elements, colors and patterns absorbed from her trips, take over the surface of her work. The cypresses from Granada are invaded by the Alhambra glazed tiles; the Turkish mountains adopt the kilim patterns; the nomadic people performing their daily tasks are camouflaged by the colors of their fabrics in the landscapes behind them.

Not only the imagery itself, but the history, literature, myths and traditions from these countries are incorporated in her work.  The meditation and investigation of creational myths from all over the world have led her into creating a multi-dimensional cosmology of her own, centered on the creation of the natural world.

The connections between the cultures and their environment are processed in Hird’s paintings as a meditation on our contemporary world, leading to a growing concern with religious and cultural ambiguities. Using quotes and messages from extremist sects and cultural ideas from both the East and the West, she analyzes and unites them through their similarities rather than their differences. There remains a certain aesthetic connection in the representations of the countries she has visited, intertwined by the projections of her inner landscape. Hird’s work considers and connects cultural complexities, and presents them to the public to travel with her through their contemplation.

Valerie Hird graduated with a BFA from the Rhode Island School of Design and a MFA from Vermont College. In 2008 she was granted an award from the Community Foundation of Vermont. Hird has worked and travelled throughout the Middle East, North of Africa, Southern Europe, Central Asia, and South America. Likewise, she has exhibited widely in the United States and abroad. Her work belongs to such public and corporate collections as The Rhode Island School of Design, Providence RI; The Fleming Museum, Burlington VT; The Exxon Corporation, Dallas, TX; and Pfizer Inc.; among others. Born in Massachusetts in 1955, Hird moved to Vermont in 1979, where she currently lives and works.